The quiet village of Swinley Mordayne. Being apparently the single most uninteresting village in the country, novelist Aylmer Flotman has decided to stay there to seek inspiration for his next novel. It seems not be working, but, soon after Flotman has been moaning to his friend Desmond Merrion that nothing ever happens in the village – well, you can guess, can’t you?

Early in the morning, Lord Barromer, the village squire heads out riding. He is later found dead, apparently kicked in the head by his horse. But everybody assumes it was an accident – what else could it be? But Barromer’s death is not thOe last. Is Swinley Mordayne going to become the unluckiest village in the country? Or are these accidents in fact cold-blooded murder?

HINT: The book isn’t called EARLY MORNING ACCIDENT, is it?

My entry for Past Offences Crimes Of The Century meme, which this month tackles 1945 – Death Comes As The End, Sparkling Cyanide & The Curse Of The Bronze Lamp having been tackled elsewhere (and elsewhen) on the blog. I was assuming that I might have to actually buy a book – still not bought one this year – when I found that my battered copy of Early Morning Murder, bought for a pittance on ebay a while ago, was the correct year. What better reason for reading it?

And I can say with confidence, dear reader, that being the only book that you’ve found that fits the criteria for a book-reviewing meme is not only an excellent reason for reading Early Morning Murder, but it’s probably the only one. Because it’s not very good…

It starts out promisingly enough – but as the death count rises and still nobody seems to actively investigate things, it starts to become a chore. As Burton’s series detective, Merrion is barely in it – he crops up to visit a couple of times – and basically does nothing to help sort matters out. He raises a few questions and basically agrees that an accident is the most likely reason. It’s a good job that certain characters have guilty consciences as it’s only by confession that things are sorted out, not that anyone really believed there was anything to sort out in the first place.

This lack of investigation really hinders what could have been a promising tale – by the end, I was willing the 180 page count to be even shorter. The prose is perfectly fine, but the plot is an utter let down – not at all what I was expecting from Miles Burton aka John Rhode aka Cecil Street. Maybe this is his attempt to experiment with the genre – if it was, then this experiment failed.

I’d be curious to know what others think, but please don’t waste a lot of money trying to get a copy. There’s a couple of Burtons coming from the British Library soon – fingers crossed for them. In the meantime, this one is Not Recommended. 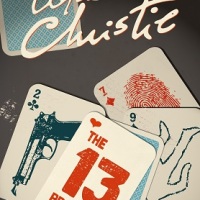