Death In Captivity (1952) by Michael Gilbert 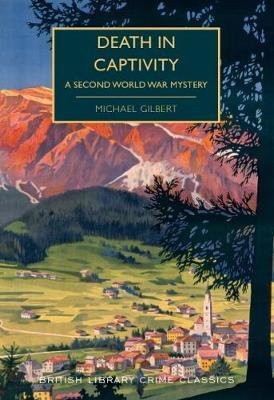 Campo 127, Italy, in the final months of the Second World War. As the days pass for the Allied prisoners-of-war, plots are afoot to escape. All of the three methods are constantly being attempted – over the wall, through the wall (i.e. the front gate) and under the wall. The tunnel from Hut C in particular is a work of genius – structurally sound and with a perfectly disguised entrance, under a stove that requires four men, working with ropes and pulleys to open. The tunnel is the culmination of months of work – work that threatens to be ruined when a body is found in it. A body that does not belong any of the tunnels. And the tunnel was empty when it was closed up for the night…

After the body is moved to be discovered in a safer location, the problems begin to mount up. If the killer isn’t found, the Italians running the camp are more than happy to execute anyone they feel like for the crime, and any escape attempt is at risk. Is it possible the Italians know about the tunnel? Do they have an informant amongst the prisoners? And as desperation mounts on both sides as the War approaches its final days, will anyone get out of the camp alive?

I wrote a few reviews a while back under the banner “Do Mention The War” looking at books both written and set during the war, specifically when the outcome was still in doubt. This doesn’t count, as while it’s set during the conflict, it wasn’t written until 1952 – it also goes by the title of “The Danger Within”, by the way.

It’s a unique setting – I’m not sure of any other mystery set amongst prisoners of war, the closest being The Case Of The Murdered Major by Christopher Bush – and Gilbert takes full advantage to set different obstacles in the path of the sleuth character, Captain Henry “Cuckoo” Goyles. Not many other mysteries can find a good reason for locking the hero in solitary for days, for example. The author also does a good job of making a reasonable number of male British soldiers into distinctive characters – not every author manages that well, especially when the characters all have the same occupation.

The plot marries a traditional whodunit with the escape plot thriller almost perfectly. The attempt to keep the villain secret in the final chapters falls a little short, as there is an inevitability to the killer’s identity from a certain point, but there’s some clever stuff going on here. I was a little underwhelmed by the solution to the impossible location of the body, but the book is still a great read, with an entertaining and intriguing plot. I’ll definitely be reading more Gilbert soon, thanks to the British Library.

Availability: Out now, in the British Library Crime Classics range.

Just The Facts, Ma’am: WHEN – set during WWII