The White Rose Murders by Michael Clynes aka Paul Doherty 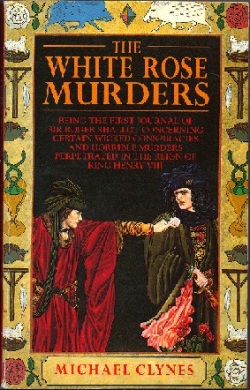 It’s 1517, Henry VIII is on the throne and James IV of Scotland has just been killed on the battlefield at Flodden. His widow, Margaret, Henry’s sister has fled to England and wishes to be restored to Scotland where her infant son rules under a Council of Regency. There are rumours of a Yorkist plot surrounding the events and Benjamin Daubney, nephew to Cardinal Wolsey, and his manservant, Roger Shallot, are asked to assist with the restoration. After spouting a cryptic riddle, Selkirk, a mad physician is found poisoned inside his locked cell in the Tower, with no poison to be found. What is discovered is a single white rose on the pillow, the symbol of the House of York. How could the Yorkists have got past the guards and a locked door? What exactly is the nature of their plot? And who exactly is involved?

I’ve been enjoying Paul Doherty‘s books a lot recently – you can tell from the number of reviews and the dedicated page – but at the same time, I’ve been waiting for the first really great one. This is it. So why is this the best so far?

The descriptions are as vivid as ever, but this is the first that I’ve read that is written in the first person, namely Roger Shallot. His voice adds a different tone to the descriptions, making some of the more horrid elements of Tudor society seem almost matter-of-fact, which of course makes them worse to read about. Also, Shallot is narrating the story to his priest as his memoirs and he often makes asides directly to the priest, usually to shut him up, or to call him on his hypocrisy about Shallot’s vices. Oh, and Shallot does tend to exaggerate or blatantly lie about some events, mostly future ones – apparently he had his wicked way with Elizabeth I. Shallot also claims that his friend Shakespeare promised to write him into Henry IV – he thinks that he’s Hal, but obviously he’s actually Sir John Falstaff.

Shallot isn’t the nicest person in the world – he’s a bit of a coward for a start and takes what he can get. Often stealing the silverware, for example, but also, which is rather more unacceptable, seducing a prioress with the lights out, pretending to be his more attractive master. He is also responsible for at least one character’s death, but, given his reasons, you do sympathise with him on this point. This narration does add an extra spark to the story, making it all the more engrossing to read.

The mystery itself is clever – the locked room is the first of Doherty’s that I’ve read so far that is a perfectly fair one – I spotted the trick, which isn’t complicated, but it’s still clever. The murderer is hidden pretty well – there are a couple of clues, but interestingly, Daubney actually suspects someone else and it’s only a comment made by Shallot after the villain stands revealed that shows that there was a distinctive clue after all. The clues are very easy to miss, but the villain is very guessable.

Any quibbles? Some of the suspects could maybe have done with being given a little more to do, as some of the lesser characters merged into one as I read it, but that might just be me.

Out of print, but a number of copies are on Abebooks or eBay. There are versions with both Paul Doherty’s name or that of his pseudonym Michael Clynes.