“I WILL KILL THE LADY AT 8. WHAT CAN YOU DO ABOUT IT?” Thus reads a note, handing in at the 87th precinct, which starts a 12 hour manhunt. Is the threat serious? Who is the Lady? And how do you catch a killer when you know absolutely nothing about them?

Ed McBain, aka Evan Hunter wrote over fifty novels about the cops of the 87th precinct – this was the seventh, and I’ll freely admit that I don’t know much about them – for a more detailed view, I’d recommend Tipping My Fedora’s ongoing bibliography of reviews. But you don’t get over fifty books published if you aren’t any good, so, when I saw this in my favourite local charity shop – Freshfield Animal Rescue in Southport – I thought it was worth a punt.

So – a police procedural novel from the late 1950s. Is it my cup of tea? And is it actually a mystery novel?

Well, so much for my reading a series in order, but I figured that this series is pretty hard to get hold of in this country and as this was an early one, I’d give it a go. I haven’t read many of Sergio’s reviews – sorry mate – because I know there’s a level of soap opera going through the series in terms of who lives and who dies, and I wanted to gauge my interest in the series first.

This book focusses on three members of the Precinct, Steve Carella – who I think has a large role in all of them, Cotton Hawes and Meyer Meyer (honest – that’s his name). In particular, Hawes gets most of the investigative action, spending time interviewing and propositioning/being propositioned by various candidates for “The Lady”.

It’s an easy read and doesn’t feel dated at all. The characters are all perfectly good company, although Hawes needs to get his priorities right in terms of his love life. The core problem is that it doesn’t really settle on what it wants to be. For the most part, it’s a procedural, as the team investigate and eliminate various leads. Then it switches to an action thriller, with a rooftop gun-battle between Hawes and the suspect. And then when it comes to the finale, we actually get a little bit of a mystery – although… right, how can I say this without spoiling it?

It’s the age-old problem of knowing how many pages you have left until the end of the book. By completely closing off the previously investigated threads earlier in the story, there is a pressing inevitability as to the identity of the killer – which, by the way, also breaks the rule about having said character appear in the first quarter of the book, otherwise it’s cheating. I’d have left some of the earlier threads hanging… So, despite the attempt at a surprise, it’s not really a mystery.

But that brings the problem of the villain’s plan, which is so blatantly bonkers – there is absolutely no way they could have got away with it – that it’s straight out of an Agatha Christie book. It seems jarring compared with the rest of the story.

However… despite this absolute nonsense, there’s no denying that I really enjoyed the book. It’s well-written and a fun read, and there’s every chance that once I clear my ever-increasing backlog, I’ll come back to the series – reading it in order, obviously. Recommended, but don’t expect a fantastic mystery.

Oh, one last point – I don’t believe for a second that a certain person wouldn’t remotely recognise a picture of another person just because they’ve SPOILERED their SPOILER. If you’ve read the book, you know what I mean! 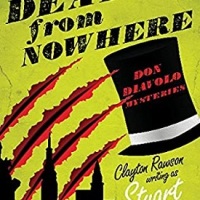