My Kindle – A Review and Some Recommendations 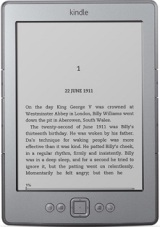 It’s been nearly two months since I bought myself a Kindle, so I think it’s time to share my thoughts on the device and at the same time give a few recommendations as to bargains that can be snapped up for it.

The Kindle comes in two varieties currently – the 3G + Keyboard device and the Wi-Fi smaller one without a keyboard. I’ve got the second one while my good lady wife Mrs Puzzledoctor has the larger one, so I’ll say a little about that one as well. So, was it a worthwhile investment?

Normally I put a one sentence conclusion at this part of my reviews, but I’ll leave you in suspense for a little while.

Pro: I can carry around a library in my jacket pocket. Now my jacket inside pocket – and as I’m a teacher, I do have my jacket on most of the time – will just about hold a thin paperback. As readers will know, I’m dipping in and out of the original Sherlock Holmes stories while reading a whole lot more of a wide variety of crime fiction and having the ability to choose what I want to read, provided I’ve planned ahead and downloaded it, is really useful. Currently there are about thirty unread books on my Kindle, most of which bought for a pittance, plus several collections of short stories.

Con: Currently there are about thirty unread books on my Kindle, most of which bought for a pittance, plus several collections of short stories. As someone who has always had a mild problem with sticking with a book if the first chapter is a bit iffy, taking myself somewhere without any alternate choice of reading material. Having the ability to switch books instantly… well, there have already been a couple of books that have bit the dust due to that.

Pro: I’ve read a lot of books recently that I wouldn’t have been able to if it wasn’t for Kindle. Either books that I found due to them being cheap (or free) or books that I’ve heard of but basically cannot easily find in the UK.

Con: Not everything is available on Kindle.

Pro: Not everything is available on Kindle. Which means that I’ll still be frequenting my local bookshop, Formby Books, and the local library. The Amazon storefront isn’t really designed for proper browsing – indeed the chart is often skewed by books that were cheap and then had their prices inflated. I’d never suggest that some authors/publishers deliberately drop their prices, get a decent chart position and then inflate them again… oh, whoops, I just did.

Con: You can’t read it in the bath – well, I suppose you can, but I won’t.  But that’s what those papery things are for.

So, in conclusion – I love my Kindle! But it’s not going to replace proper books but works perfectly well side by side with them.

There are some great traditional books out there, available for free or for a pittance. Generally I’ve found that the free ones, as they are based on scans with text recognition can be of slightly less than perfect quality – you might be able to ignore the occasional lapse or spelling mistake but it annoys me. But with The Complete Sherlock Holmes, The Complete Father Brown and The Mystery of the Yellow Room all available, it would be a crime not to have these on your device.

A Cold Day for Murder by Dana Stabenow – the first in a long series of mysteries set in Alaska and best of all, it’s free! A deliberate marketing strategy designed to lure people into liking a book and then buying more. How underhand. It certainly worked on me – I’ve bought the next one (and even that was pretty cheap) based on this one. There’s another series by the same author which has followed the same pattern – the first book is Fire and Ice.

The Nightingale Gallery by Paul Doherty – how many times can I plug this? Out of print in this country, it vanished from the Kindle store for a while and then re-appeared. Less than £2 for one of my favourite mysteries of recent years. The next three books, The House of the Red Slayer, Murder Most Holy and The Anger of God are also available. There are also a lot of early Simon Brett novels available from the same publisher, also for a pittance, including Cast, In Order of Disappearance.

Enter, Second Murder by Alanna Knight – an author who I had never heard of, this is the first in a series of Inspector Faro novels, all of which are currently 90p. Newspapers cost more than that! A decent little mystery and I’m looking forward to revisiting the series.

Hoodwink by Bill Pronzini – not a cheap book, just normal price, but highly recommended and practically unavailable in the UK in paper form. A fine novel and I’ll be revisiting Pronzini soon.

The Fourth Door by Paul Halter and John Pugmire – the first novel length translation of the apparent heir to John Dickson Carr. Again, full-price (£6.50) but a paperback version costs a lot more.

A Spark of Death by Bernadette Pajer – a midprice book – £4.44 – bought on a whim due to a recommendation in EQMM and it being set in Washington, a state where I recently had a rather lovely holiday. An outstanding debut and, again, seemingly not available in paper over here.

Honk Honk, My Darling by James Finn Garner – if you’ve a taste for the bizarre, then try some “Clown Noir” for 77p. It won’t be to everyone’s taste, but stick with it – it’s worth it!

So far, I’ve only come across one stinker for free from the Kindle store – I won’t link to it, but feel free to browse my reviews to find it – but I’m sure there are many more. So, over to you, my ebook-endowed readers. What bargains have you found to download?