The Four of Hearts by Ellery Queen 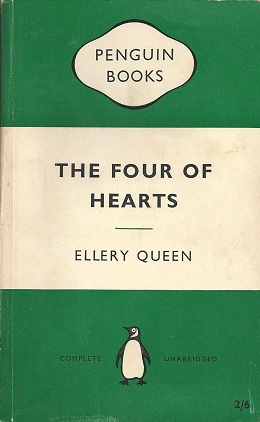 Once upon a time, there was a little blog that set out for itself a challenge – to present a complete bibliography of reviews of the works of Ellery Queen. Despite a plug in Ellery Queen’s Mystery Magazine, the last of these appeared over six months ago. Well, finally, as Old Author October continues, we return to the great American detective.

Ellery has relocated to Hollywood, as you may recall from The Devil To Pay, and is frustrated by the lack of work. He finally gets a deal to write the story of the romance of Hollywood’s sweethearts, Jack Royle and Blythe Stuart. But, as they fly off into the sunset to live happily ever after, their plane disappears and when it is discovered, they are both dead, having been poisoned by their cocktails. Ellery finds himself in a race against time to stop a killer before Royle’s son and Stuart’s daughter find themselves on the killer’s hit-list as well.

We’re still in middle-era Queen, where the stories were being serialised for magazines before being published (I think) hence the division into four acts (the first of which is really quite annoying) and the inordinate amount of pages that are given over to the initially unconvincing romance between Ty Royle and Bonnie Stuart (who, it seems, falls for Ty when he says that she’s got a pretty decent figure – what a smooth talker/girl with low self-esteem).

What I found surprising was that, after about fifty pages of these two idiots, I actually started to warm to them, and the predictable result of Ellery trying to keep them apart did bring a smile to my face. But, as ever, the problem with all this soppiness, as with every book since Halfway House, is that for large sections of the narrative, the mystery is shunted into the background.

And that’s certainly a shame in this case, as the mystery is quite deep and clever and is fairly clued – although it should be said that the murderer, along with every character who isn’t Ty, Bonnie or Ellery, really could have done with a little more page time. But the depth of the mystery reminds me of the earlier Queen novels.

So, to summarise, this is nowhere near the level of The French Powder Mystery, The Greek Coffin Mystery or my favourite (so far chronologically) The Siamese Twin Mystery, but it’s something close to a return to form. Fingers crossed for the next one, The Dragon’s Teeth, as it’s not one that I’ve encountered before. And I promise, it won’t be six months before the next review. 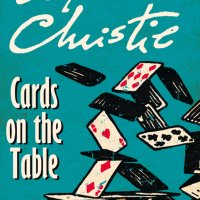