A Good Soldier by Jeffrey Marks 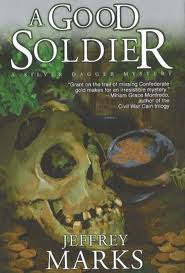 It was a while ago that I reviewed The Ambush Of My Name by Jeffrey Marks. I honestly can’t remember who recommended it to me, but it was a little gem. Ulysses S Grant, in the aftermath of the Civil War, investigates a murder than turns out to be something more and, despite what could be a very silly ending – no spoilers, but it has to be read to be believed – which actually worked.

In the second book, Grant visits the village of Bethel, Ohio, where he spent part of his childhood, only to find that his old comrade who he was planning to stay with has recently died. In fact it seems that a small band of soldiers from the town have two things in common. Since being released from a Confederate prison camp they a) seem to have come into a lot of money and b) they seem to be dying in odd circumstances. Duty bound to get to the bottom of things, Grant begins to hunt for both buried treasure and a murderer…

Quite a short book, this one (and very cheap on Kindle, as is its predecessor) and it, like its predecessor, is an extremely enjoyable read, but for different reasons. This is simply an outstanding mystery.

Marks chooses to take a small group of suspects (about six) and still manages, for me at least, to pull off a surprise without cheating. The identity of the murderer was very well chosen with a couple of clues – one of which I spotted but ignored, putting it down to sloppy writing – silly me. There is a section in the middle, involving decoding a treasure map, which I found a bit obvious, but apart from that I really can’t fault it.

Set in an era that I know virtually nothing about – I had to look up who Jefferson Davis was after many mentions – the added historical background complemented the plot nicely. As it’s a short novel, I’ll say no more, but it’s highly recommended and I’m delighted to see there’s a third novel in the series out now.