The Queen Of The Night by Paul Doherty

Rome, AD 314, is beset by problems. The children of the city’s richest families are being kidnapped for ransom from places previously believed to be safe, the kidnappers disappearing without trace. Meanwhile, veterans from a Roman campaign against the Picts are being picked off one by one – their bodies being discovered with… a certain male body part removed and placed in their hands – an ancient Pict method of execution.

Claudia, secret agent for the Empress Helena, is charged with resolving both issues but she is distracted both by keeping Murannus, her lover, from returning to the gladiatorial arena, and the discovery of a perfectly preserved body of a young woman, buried in the orchard of her uncle’s tavern. Exactly how many killers are stalking the streets of Rome?

Another series from Paul Doherty completed – this is book three of four, but Murder’s Immortal Mask, the fourth one, was one of the earliest of Paul’s work that I read and reviewed. I really liked that one and I’d say it’s probably the best of the series. I’d still read Murder Imperial, the first one, first though, as regular characters in the series are treated as suspects in that one, so there’s not many potential killers if you know who makes it to book four…

I don’t think this is one of Paul’s stronger series though, simply because I don’t really feel much love from the author for Ancient Rome. There’s a sense in the medieval England stories, whether they feature Hugh Corbett, Brother Athelstan or the Canterbury pilgrims, that Paul is sharing his love of the period – the same goes for the Amerotke stories in Ancient Egypt – but I’m not really feeling it here. The last book in the series came out in 2007 and it seems that Paul isn’t in any rush to return to it.

But laying aside the feeling that I got as a reader, what’s this one like? For a Paul Doherty book, it’s perfectly fine, but it’s not as good as others. There’s a few familiar stories – another band of soldiers being killed one by one, although in this case, there’s fewer to kill than usual and they are more individual characters than in some cases. There’s also part of the solution that I’m sure Paul has used before – I can think of an example of the reverse of it, but I’m sure this version has been done. Surprisingly, there’s a dearth of suspects, which was a bit of a surprise…

However, the ending is pretty clever. While the who is no surprise, the extent of what is going on is very well constructed and the trap that sometimes occurs with two concurrent mysteries, namely they’ve got nothing to do with each other, is avoided with some clever links between the two strands. And to be fair, while the murderer is obvious, the kidnapping story isn’t as clear cut.

But even an average Doherty is worth a look, particularly if you like his work. And even if you are working your way through this series, do stick around for Murder’s Immortal Mask, as the series does end (?) very well. Recommended. 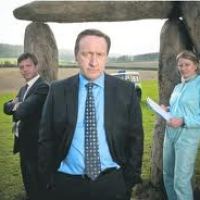