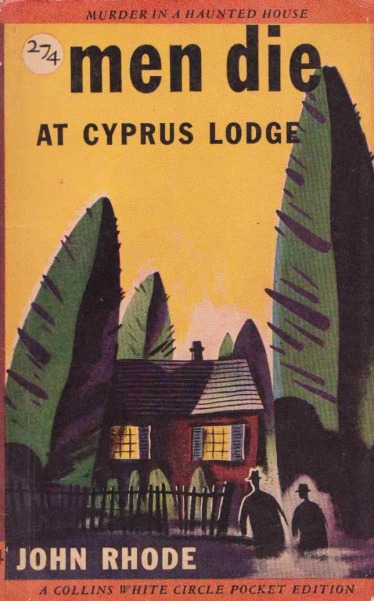 Cyprus Lodge stands in the town of Troutwich and has a terrible reputation for scaring residents away. One hundred years ago, a pork butcher was poisoned with aconite (or aconitine, depending on what mood the author seems to be in) and now the night in the house is disturbed by the sound of his clogs walking along the hall tiles and the jingling of his coins in his pocket. Oh, and there was the issue of Doctor Hemsby, who, rather than being scared away, ending up killing himself by drinking, oddly enough, aconite.

But for some reason, Hemsby was found in his study with two glasses, both of which showed traces of the poison – but if someone else drank the second glass of poison, what happened to them? And if Hemsby killed himself, why drink two glasses when there was a fatal dose in each glass?

Three years later and another death occurs in the house. And then another. Is a vengeful ghost out for revenge (no) or is something even more sinister going on at Cyprus Lodge?

My first book this month for #1943book over at Past Offences’ Crimes Of The Century meme, and the thirty-ninth outing for Dr Priestley. Well, not so much of an outing, as he’s now firmly entrenched in his house passing out occasional advice when Jimmy Waghorn, currently working for military intelligence drops by for advice on a case. I do find the balance of investigation interesting as Waghorn gathers evidence and solves a good chunk of the case himself, as usual, although it is Priestley who spots the crucial link between the crimes.

It’s one of the better Rhode books that I’ve read so far – not quite up there with Peril At Cranbury Hall, but not far off. The mystery builds nicely with small reveals and surprises and while I think the reveal is telegraphed a little too early, it’s a good bit of misdirection. One has to turn a bit of a blind eye to the somewhat over-the-top reason for the haunting of Cyprus Lodge – there are other, easier ways to achieve what the killer wants – but I’ve seen sillier motives.

The wartime setting is used to full advantage, moreso than I’ve seen in other Golden Age mysteries, with the exception of Murder In The Submarine Zone. Waghorn is undercover, investigating who is leaking secrets to the enemy, and Superintendent Haslet has been called out of retirement while the younger men have gone to fight. Hemsby’s “suicide” was easily accepted as such as it occurred on the eve of war being declared so people had other priorities.

There are some other signs of the time the book was written. Waghorn smokes a cigarette to “stimulate his mental processes”, two ladies run away from a dead body “incontinently” and there were butchers who specialised only in pork. And Rhode seems to hit an odd double standard by accusing the newspaper coverage of the Lamson case of inspiring the murderer to use aconitine by describing it in detail – while, of course, describing the poison himself in detail.

And it’s worth mentioning once again Rhode’s stunning inability to come up with an original title. Men Die At Cyprus Lodge – does exactly what it says on the tin.

But this is a fun Golden Age mystery, and well worth a reprint. Highly Recommended.