Death Leaves No Card (1939) by Miles Burton aka John Rhode 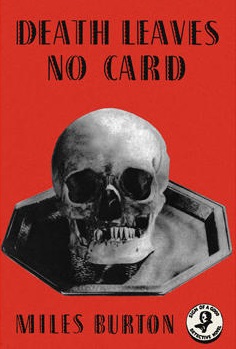 At Forstall Farm one morning, a noise is heard from the bathroom. The house is owned by Geoffrey Maplethorpe and his nephew, Basil, is a guest for the weekend. It is Basil who made the noise – after the bathroom door, locked from the inside, is broken down, he is found dead on the floor, one foot hanging over the edge of the bath. Unfortunately for the police – and Inspector Arnold in particular – no cause of death is apparent.

The first impression of the local doctor is that Basil died of shock – electric shock that is. But there is one slight problem with that Forstall Farm doesn’t have this new-fangled electricity connected to it. So how was Basil murdered without someone leaving a mark on his body? Inspector Arnold needs the help of his crime-solving buddy Desmond Merrion to find out – a pity that Merrion is out of action with illness. Arnold is on his own…

So it’s back to the Golden Age after a few new releases, and it’s 1939 and our old friend John Street/John Rhode/Miles Burton. It’s not easy to get hold of the early Burton books. Apart from the British Library reprints, and a copy of the apparently-rubbish The Milk-Churn Murder, I’ve not seen any Burtons from before 1945 for sale – and that was the actually-rubbish Early Morning Murder. Burton books, especially from this era, seem rarer than the Rhode titles, but thankfully Ramble House have released two Burton reprints and this is one of them. So I was rather curious as to what I’d find with this one.

Well… it’s not the best. Don’t get too excited by the locked room aspect, as it’s not exactly a thriller, and quite guessable. And, in my opinion, the killer was pretty obvious as well. The crucial notion necessary for solving the crime isn’t exactly difficult to guess, and once you spot that… well, maybe it’s a good job that Desmond Merrion was absent for this one, as I’d hope he’d have suggested it earlier.

It’s decent enough though. There are some nice bits where Arnold, alone with his thoughts, comes up with some rather bonkers murder methods, and it’s always nice to see the detective’s sidekick actually having the brain power to figure things out – well, he does get the method explained to him, but he puts the rest together. But when the lead character’s particular trait is “smokes a pipe” then it’s always going to be difficult to be that gripped by the tale.

The odd thing is, this is one of the books that is recommended reading for the John Rhode talk at the Bodies From The Library and it’s more a demonstration of the weaker aspects of his writing than the stronger ones. No idea why this is recommended, apart from its (somewhat pricey) availability.

There are a few interesting things here, most notably the use of “shock” to mean “electric shock”. The victim is diagnosed as possibly dying of “shock” but apart from one suggestion of someone climbing up to the bathroom window and waving a basilisk at the victim (!), it always is implying electricity was involved. Oh, and the assumption that Merrion is looking after himself by “gorging himself on Bovril and milk or something equally wholesome” – well, that sounds disgusting, quite frankly.

Anyway, this is better than Early Morning Murder, but not as strong as the better books from the author. Well Worth A Look, but don’t judge Street on this book alone…