The Secret Hangman by Peter Lovesey 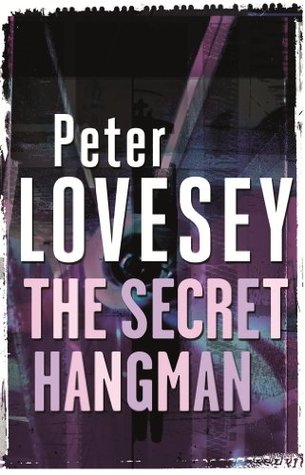 Detective Superintendent Peter Diamond is being stalked. A woman is desperate to get his attention – apparently she has romantic intentions in his direction. But while he is doing his best to ignore these approaches, something more concerning is happening in Bath.

At first it seems like a double suicide – three days apart, a couple are separately found hanged in public places. Then it seems that the second victim may have killed the first and then committed suicide. Either way, there doesn’t seem to be anything much to worry about. Until DC Ingeborg Smith finds a police report from a few years previously, when another couple were found dead in exactly the same manner. And then another couple disappears…

Peter Lovesey has written many series over the years, but the one that he focuses on now is that of Peter Diamond. Since a rough beginning to his career – Diamond spends some early time off the police force entirely – he has become a fairly traditional police chief, admittedly with a tendency to get a little carried away in the interrogation room, with a detailed background that really fleshes out the character. He is widowed in an earlier book, and now seems to be realising how lonely he has become.

I wasn’t much of a fan of The Last Detective, but the other Peter Diamond books that I’ve read, namely, Bloodhounds, Upon A Dark Night, The Vault, Stagestruck and Cop to Corpse were all enjoyable reads, so I picked an earlier book at near random and am planning to read the rest of the series in order – and I’m really glad that I did.

It’s a really comfortable read, despite touching on some serious issues. It’s one of those books that you feel that the author enjoyed writing – it’s got a very relaxed writing style. Diamond is a compelling lead, and his team are fun – maybe not as distinctive as those in, say, Kate Ellis’ Wesley Peterson books, but fine nonetheless.

Plotwise, everything is fairly clued. In one aspect, this is a problem, due to a bit of a dearth of suspects leading the killer to be pretty guessable – knowing that Lovesey tends to play fair means that things are really narrowed down. But it’s a sign of the quality of the writing that I found myself not remotely caring that I was 95% sure of who the guilty party was. I was just as intrigued as to where the romantic plot was going.

All in all, this is a very satisfying read – I suppose the clearest sign of how much I enjoyed it is that I’m actively making myself wait before reading the next in the series. But rest assured, it’s coming soon. But in the meantime, this is Highly Recommended.