Verdict Of Twelve by Raymond Postgate 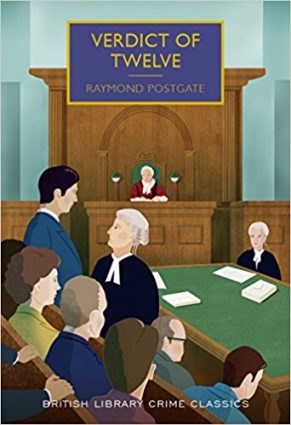 Twelve good men and women – the traditional jury of a criminal trial in the United Kingdom. But even members of a jury in a criminal case have secrets in their past that they would not want other people to find out. Secrets that affect decisions that they make in their present lives – and secrets that will affect how they make their judgment of others…

A woman stands in the dock accused of a terrible murder. As the prosecution and the defence go over the events both before and after the crime, describing, in turn why the accused is guilty or innocent, the jury sits and contemplates their verdict. And as the case is brought to a close, it falls to them to make the final judgment – but will it be the correct one?

Verdict Of Twelve was published in 1940, the first of three crime novels written by Raymond Postgate (father of Oliver “Bagpuss” Postgate, trivia fans), and is one of the books detailed in Martin Edwards’ The Story Of Classic Crime in 100 Books, under the category of “The Justice Game”, books centred on the justice system.

It’s an interesting read, structured in three sections – the jurors are introduced one by one, some in more detail than others, then the events leading up to the crime, and the crime itself, are told in flashback, and then we see the trial and verdict.

The book is much admired and I can see why it’s so highly rated. It’s a well told tale, but it’s not without its flaws. The detail in the lives of the jurors is well done, but not much of it contributes to the overall plot, and, after the jump into the past from the middle section, I’d managed to forget most of that detail – basically, there’s only one juror’s history that particularly matters and it’s easily the least forgettable, luckily. As for the crime, well, it fits the nature of the novel, but fans of the classic whodunit may find themselves a little disappointed with the resolution of that aspect.

So, well-written and definitely an important novel, but I admired it more than I enjoyed it. Well Worth A Look.