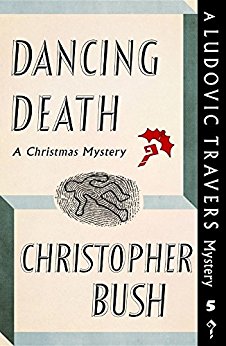 A country house party at Christmas time in the Golden Age, so as you might expect a) the house is surrounded by deep, deep snow, b) one of the guests is an amateur detective and c) someone is about to get murdered.

The house in question is Levington Hall, the host one Martin Braishe, a government scientist who has invented a special, rather lethal, gas. But during a fancy-dress ball, it isn’t gas that kills one of the party, it’s a good old-fashioned dagger through the heart. As another guest drops dead of a “heart attack” – yeah, right – it seems that a killer is on the prowl. But it’s going to take at least one more death before Ludovic Travers, Bush’s series sleuth, can get to the bottom of things.

This is my second encounter with the work of Christopher Bush, the first being The Case Of The Tudor Queen, which I was a bit underwhelmed by. But now Dean Street Press are on the case and are re-publishing the entire Bush back catalogue. Bush wrote sixty-three novels Travers novels between 1926 – The Plumley Inheritance Case – and 1968 – The Case Of The Prodigal Daughter, and of those, this is the fifth. So far, Dean Street Press have released ten (up to The Case Of The Three Strange Faces).

This is a bit of a game of two halves, really. On the one hand, this is an excellent fairplay, well-clued mystery. There’s a good handful of suspects, and while a couple seem to fade into the background a little too early, there’s plenty going on here. There are plenty of questions abounding that only make sense when the full story is revealed, and there’s a clever murder method here as well. The solution is both complex and simple and while the killer is fairly guessable, there’s plenty of details that all but the most careful armchair detective will miss.

On the other hand… the characters are all a bit one-dimensional. This is more fuel for my theory on why some writers survived the Golden Age and others vanished into obscurity. That theory, if you recall, is not the popular one, i.e. “being female” but that the authors who created interesting sleuths were the ones who lasted. Travers is not desperately interesting, and the central section does rather drag.

So, if you’re looking for a well-constructed puzzle, then the line starts here. But if you want a character-filled mystery that will break your heart… well, then Bush probably isn’t for you, on the evidence of this one at least. Still, this is a mystery review blog, so I guess that makes this one Well Worth A Look.

Many thanks to Dean St Press for the review copy.