Doc On The Box – Death In Paradise – Series Seven 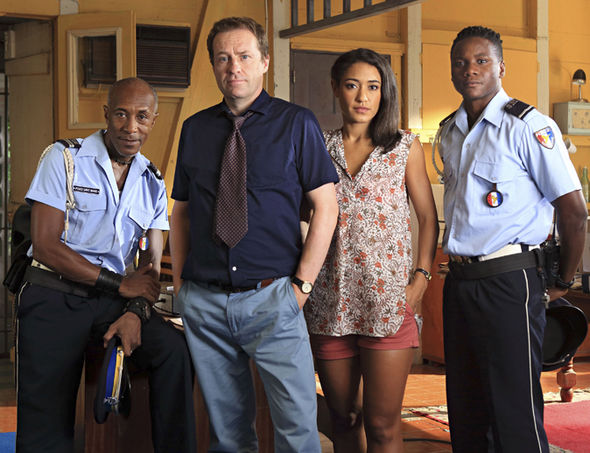 Well, the sun has set on Saint-Marie again for another year – it’s been confirmed that it’ll be rising again next year – and as ever, it’s time for me to take a look at Series 7. Seven? Seriously, it’s been going on for seven years… I’ve been reviewing the series ever since it started, in the first year of the blog, so it’s time to take a look at this one, episode by episode. And once again, did the writers manage to outwit me this time?

Let’s take a look at the series overall, and predominantly the change in the lead actor, again. I thought Ardal O’Hanlon acquitted himself well, but he struggled at times to do much with the character. Richard Poole was a fish out of water, Humphrey Goodman was a loveable clumsy chap and Jack Mooney is… a nice guy. That’s it, really. The character suffers from being not desperately interesting outside of crime solving, but I thought O’Hanlon did a good job with what he was given. I’m not sure exactly what could have been done to keep things light – well done, though, for not just doing another Richard Poole.  And while Dwayne got loads to do, with a serious girlfriend and the return of his father, next series, please give Joséphine Jobert something to do. She deserves to do more than just basically be someone to talk to… Oh, and Don Warrington continues to steal every scene he is in – the man is simply awesome.

Anyway, on to the episodes:

A woman jumps to her death from a hotel room locked on the inside. A clever central idea for the locked room, possibly made more complicated than it needed to be, but with a decent emotional kick to it. And I worked out enough to make it 1-0 to me.

A man is killed by poisoned aces of spades during the final of a poker tournament. Not bad, but let down by me having what I thought was a better solution, namely that the victim was a known cheat who had extra cards in his pocket – the killer poisoned one of them in advance so that he would die if he cheated. Anyway, I was wrong, so 1-1.

An author is found dead on the beach after apparently being stabbed during a swim in the ocean. Didn’t have a clue what was going on in this one, but I rather liked it, despite the killer being very guessable. Actually, that brings up something that I found in a few of the episodes this series – some of the non-guilty suspects never convincingly get brought under suspicion, like… well, SPOILER in this one. But that’s 2-1 to the series.

In a faith healing session, an elderly local lady drinks from a cup of water and drops dead, poisoned by nicotine. Right, an aside on this one, as it annoyed me. It’s fine to repeat general plot structure – let’s face it, Dame Agatha herself was very fond of the basic idea started in Peril At End House – but this is a very specific structure that just reminded me of the much better Richard Poole episode that had exactly the same idea. 2.5-1.5 as I sorted out everything but the killer, in part due to a sense of “they’re not doing that again, are they?”

A man accosts our heroes in a bar with a phone message from his wife claiming she is being attacked. When she is found dead at the local yacht club, it seems everyone has an alibi. Hmm, bit of a mess this one, as it ignores one of its set-ups – Catherine swears no one left the charity auction at the yacht club but somebody did, briefly – and the murderer seemed very arbitrary to me. I’ll admit that I didn’t have a clue what was going on, so 3.5-1.5, but that’s a reluctant concession.

Ah, the best episode of the series. A beautifully constructed mystery, with a reason for everything, including the impossibility of the crime, the leader of a retreat strangled on the way to the beach while everyone else was meditating in a circle. People who’ve read a few mysteries will probably solve it – I did, so 3.5-2.5 – but this was a cracker.

An odd one this, as a man – someone who bullied JP at school – is found running from the scene of a murder, and then confesses. But why did the victim have a peanut in his hand? A nice one, and a genuinely surprising murderer, and the more I think about it, the more I’m impressed by it, although I’m not sure, once again, there were that many clues. There is a good red herring suspect though… 4.5-2.5 and the series is lost before the final match.

After a reunion concert for a reggae band, one of the band, whose wife was murdered twenty years previously, is found dead, apparently a suicide locked in his dressing room. But why did he call the Commissioner, saying he knew who killed his wife just before “killing himself”? A nice, solvable, locked room method but the killer could really have been anyone. I may be mistaken but were the audience privy to a clue who identified who the killer was? I had what I thought was a much more interesting killer so the last bit fell a bit flat. 5-3 as I worked out the locked room method…

So, another win for Rob Thorogood and his merry band of writers, and a win for me due to being able to watch a non-grim detective series where the audience is invited to play along, even if that wasn’t always possible. Not the finest of the seven series, but a good solid showing from an excellent television show, making it much more entertaining for me than a lot of stuff out there. Highly Recommended, especially episode six.