The Lair Of The White Fox by Peter Tremayne 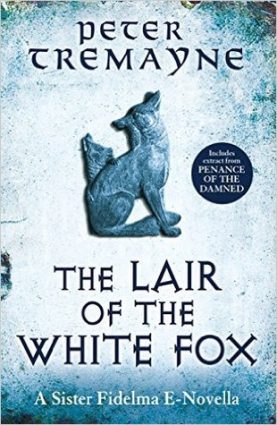 Ireland, 659 AD. Fidelma of Cashel takes a brief break from finishing her law studies and heads to visit her friend Lúach at her family home. But on arriving, Lúach is nowhere to be seen – she disappeared five days ago, apparently while riding. While the household has accepted that she is dead due to a riding accident, Fidelma has suspicions that all is not as it seemed. Would Lúach’s body really not have been found after five days? And, if Lúach disappeared while riding, why is her favourite horse – indeed, all of the horses – still in the stables?

Empowered by her legal status and against the wishes of Lúach’s ambitious stepmother, Fidelma sets out to find the truth about the fate of her friend, determined to find her – dead or alive…

“Hang on, Doc, didn’t you just do a Tremayne book?” I pretend to hear you cry. Well, yes, but as I mentioned in the review, it was a bit atypical regarding the mystery plot which is usually a lot stronger. I also had a request or two concerning where to start with the series, so I thought I’d look at this one – it’s a 99p ebook, written quite late in the series, but set before the first novel. She’s not even Sister Fidelma in this story, as she has yet to enter the religious life. Oh, and to be clear, it’s a novella, about 100 pages in total, and only available as an ebook. And it’s rather good.

For a novella, it’s a remarkably involving read, with every character feeling fully formed and the plot keeps moving forward, as the various possibilities for Lúach’s fates are considered and the conflicts in the household, both regarding Fidelma’s investigation and other events, holds the reader’s interest in what is going on.

Oh, and it’s a fairly clued mystery, with everything in the resolution being prepared for in what has gone before. Well… there is one part of the motive that I think requires a “only one thing makes sense” jump but it’s pretty minor. While there’s no locked room shenanigans going on, it’s all rather satisfying.

So, if you fancy giving the Sister Fidelma series a try, you could do an awful lot worse than give this a try. It’s only 99p for 100 pages, but beware, it might cause you to invest in 30-odd more novels. What I hope it might do it show you what the historical mystery is capable of if all you’ve seen before is bloody Brother Cadfael. Highly Recommended.

Other Historical Novellas to try:

The King’s Writ by Paul Doherty – a locked room disappearance, death in a well and a fascinating bit on info on how to punish a pig.

For The Love Of Old Bones by Michael Jecks – five short stories with bandits, armourers, and a death on a bridge. The opening story, The Coroner’s Tale is particularly exceptional due to the unconventional choice of narrator.