The Singing Masons by Francis Vivian

Old Hetherington wanted nothing more than to tend his bees. There was absolutely nothing that he didn’t know about the “singing masons”. But when he follows some of his bees when they swarm away, he discovers a hive standing over an abandoned well. The whiff of cyanide causes the well to be opened – and inside is the body of the local philanderer, Gerald Batwell, a canister of cyanide clutched in his hand.

Enter Inspector Knollis. Given his reputation, there are clear motives for the murder of Batwell, wronged husbands and discarded lovers. But only the bees know for sure…

Francis Vivian aka Arther Ernest Ashley wrote eighteen detective novels from 1937 to 1959. I would love to divulge more about his life and works, but the nice folk at Dean Street Press provided an early review copy that didn’t have the introduction from Curtis Evans. They will be releasing the ten Vivan titles featuring Inspector Knollis, from The Death Of Mr Lomas from 1941 to Darkling Death in 1956 on 1st October 2018, but I thought I’d post an early review to whet the appetite.

Because this is a very satisfying read. Well-written, with the theme of beekeeping – a hobby of Vivian – woven throughout the narrative and a plot that keeps suspicion moving, despite there being a relatively small cast of suspects. I found it took the time to develop the suspects without detracting from the mystery plot which kept me engrossed throughout.

Knollis is a charming enough protagonist, with no particular off-putting quirks. He works through the puzzle in a satisfying way, playing off the local Inspector Wilson in a fun way. The conclusion to the tale might divide some readers but I thought it was an interesting and unexpected solution to the problem.

Francis Vivian is yet another writer whose work was lost to time. Many thanks to Dean St Press for bringing him back to our awareness and I’ll certainly be taking the time to read more of his work. Highly Recommended. 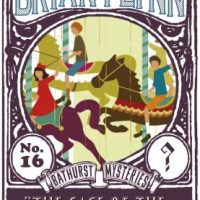