The Dungeon House (2015) by Martin Edwards 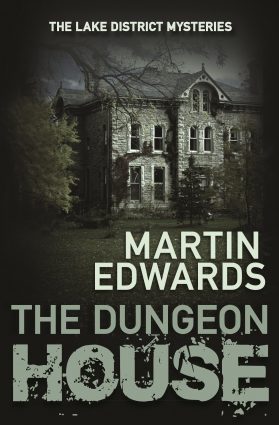 Malcolm Whiteley was convinced his wife was having an affair – he wasn’t sure who with, but as his life and career began to disintegrate around him, he began to become more and more obsessed and make her life absolutely intolerable. When she announce that she was leaving him, that lit the spark that caused him to kill both his wife and his daughter and then himself. At least so the official story goes…

Twenty years later, and Hannah Scarlett’s cold case team are looking into the disappearance of Lily Elstone, the daughter of Malcolm’s accountant three years previously, which has become more relevant due to another girl linked to Malcolm vanishing. What really happened that night in the Dungeon House? And are the tragedies really confined to the past?

The middle of my triptych of reviews of Martin Edwards’ work, this is the most recent entry into his Lake District series, concerning Hannah Scarlett’s cold case team, crime historian Daniel Kind and their will-they-won’t-they relationship. It started with The Coffin Trail (which I must read again, as I read it pre-blog) but the rest – The Cipher Garden, The Arsenic Labyrinth, The Serpent Pool, The Hanging Wood and The Frozen Shroud – are all reviewed here. It’s a strong series with a vivid setting – if I’m being 100% honest, I prefer Martin’s other long-dormant series, the Harry Devlin stories, but these are still very effective and entertaining mystery novels, with a good pair of lead characters.

And I suppose the lead characters are my only real gripe with this book. I wonder – did Martin have this in the back of his mind as a standalone novel? The prime mover of the action in the story is Joanna Footit, who has returned to the Lakes after an involvement in the events twenty years previously after much therapy, and it is through her somewhat filtered opinions that we meet the members of the cast in detail. Hannah’s investigations seem to take second place in moving the plot forward, other than to ensure the police are in the right place for the denouement, and Daniel’s role is very much relegated to the background.

Note, that doesn’t stop it from being a very effective and, at times, tragic mystery novel, and while the leads may be downplayed somewhat, the Lake District setting is as vibrant as ever. The character of Joanna is an interesting focus, not an unreliable point of view, but her memories are coloured by her opinions of the characters from her past, leading to some, inevitable, mistakes on her part – at least one exceptionally serious one.

So while the lack of development or focus on the Hannah/Daniel dynamic is a little disappointing, this is still a strong read. I think I recall Martin mentioning that he’s currently finishing off another in the series, but I might be mistaken. Fingers crossed that I’m not.