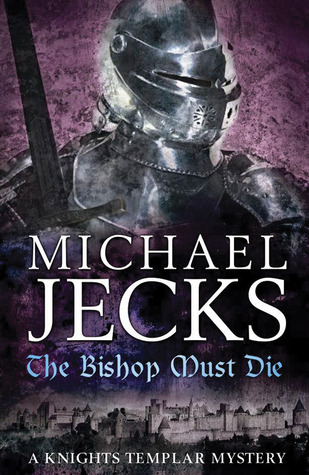 1326, and Walter de Stapledon, former Lord Treasurer of England, and Bishop of Exeter since 1308 is in fear for life. Not simply because the country is on the verge of war with itself – Queen Isabella is rumoured to be returning from France, prompting many of the Lords and landowners to join her side against the hated Edward II and, in particular, his advisor (and lover?) High Despenser. De Stapledon has aligned himself with the king, which may not have been the wisest of moves.

No, he is receiving threatening messages that his death is coming. There are many who want the Bishop dead for personal reasons – but with so many threats out there, can Sir Baldwin Furnshill and Simon Puttock possibly prevent the death of their friend?

I’ve just checked when the last time I read on of the Templar mysteries from Michael Jecks – this is book twenty-eight out of thirty-one (plus a prequel) – and, to my shock, it’s been nearly two years! Oddly, I find that a bit embarrassing – I do love this series and Mike is a friend of the blog. He’s been distracting me with his recent Jack Blackjack series, which I do implore you all to check out, but I’m a little baffled with myself as to why I’ve left this series alone for so long.

And it seems the right time to revisit it, as Canelo Books are reissuing (at least) the first five books in the series – The Last Templar, The Merchant’s Partner, A Moorland Hanging, The Crediton Killings and The Abbot’s Gibbet – starting this Monday, with the next book following two weeks later. They’ve got a handsome set of covers – much more eye-catching and considered than the random soldier covers of the last reissue – I’ve no idea if these are going to get physical reprints, but I hope so.

And mystery fans should start there, because as much as I enjoyed this book, it wasn’t its qualities as a mystery that made it so enjoyable. It’s difficult when a historical series catches up with major historical events such as a prolonged regime change, as happened with Edward II to Edward III, but such events are difficult to ignore, and Michael made the decision to involve his heroes directly in those events. The comparison that springs to mind to me is The Great Revolt, where Paul Doherty set a mystery against the backdrop of the Peasants’ Revolt, but that took place over a couple of days, rather than several years. Paul chose to continue with his usual approach of including a whodunit, one, if I recall correctly, didn’t have an awful lot to do with the historical strand of the mystery. That’s not Michael’s style, and instead we have the “who’s trying to kill the bishop” as just one strand in this historical tale, and at times, it’s not that major a strand and indeed, it’s not a exactly a complex mystery.

But these events have been building for a while in the books and, like the previous one, No Law In The Land, Michael clearly chose not to sacrifice his historical narrative to shoe-horn in a fair play whodunit. Instead, he has taken real life events and characters from the time, alongside the regular characters who I have seen develop over the past twenty-seven books, and has woven a compelling story of part of an important historical event that has a smattering of a mystery in it. The characters, as ever, feel fully formed and their motivations never seem unbelievable, and knowing what lies ahead for the King, I’m curious to see where Michael takes things in the next book.

Here’s Mike himself, talking about the Bishop and his place in history.