Cat Among The Pigeons by Agatha Christie 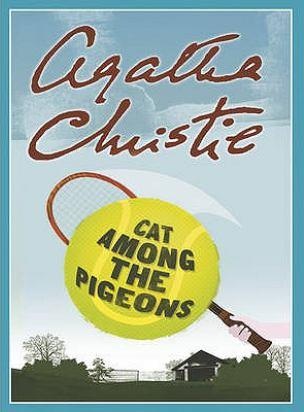 Who’d want to kill a teacher? We’re lovely people, honest. Just because we want to inflict a little knowledge on you from time to time…

Anyway, that’s the situation at the exclusive Meadowbank girls’ school – the new PE teacher, who has been getting almost everyone’s nerves, has been found shot in the new sports centre. But who in a girls’ school would be carrying a gun? And what on earth does all of this have to do with a recent revolution in the Middle Eastern country of Ramat?

Luckily, the security services have an undercover agent on the premises, but one of the students, after making an important discovery, has a much better idea – she heads off to London to recruit everybody’s favourite Belgian investigator…

This was a common suggestion for the introductory book for my Agatha Christie project at school next term, so does this tick all the boxes?

Probably not, to be honest.

It’s one of those books with a late appearance by Poirot – about two-thirds of the way through – and it doesn’t feel much like a Poirot novel. By introducing Adam the gardener at the start of the story, it feels that he is going to sort things out, but he doesn’t really get anywhere until Poirot shows up and produces the solution out of nowhere.

And I do mean out of nowhere. Maybe I missed something, but does Poirot do anything other than gather the suspects and then bring in someone who has recognised the villain before and ask them to point at them? And the second strand to the solution definitely comes out of nowhere.

There’s another cheat as well, as we get an insight into the main characters’ thoughts in the prologue and I think, given the nature of the plot, the villain’s insights don’t exactly make sense given what is being planned.

Having said all that, it’s a fun read, full of entertaining characters, and Poirot, when he does turn up, is on entertaining form. The plot keeps moving forward and the teachers are refreshingly free of caricature. Recommended, but it’s not going to be the introduction to Christie book.