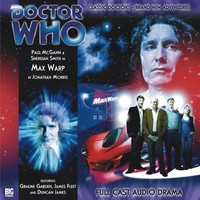 The Doctor and his companion Lucie arrive at the Sirius Inter-G Cruiser show – the place to be for all the latest spaceships. By coincidence, two important events are happening as well. The President of the Varlon Empire is hosting the Kith ambassador, a race which the Empire maintains a fragile peace, and, most importantly, Max Warp, the show for all spaceship enthusiasts, hosted by the politically incorrect Geoffrey Vantage, the somewhat dull O’Reilly and the risk-taking Timbo, aka “the Ferret”.

When Timbo crashes while piloting a Kith ship, the Doctor suspects foul play. With a murderer on the loose and an overbearing TV celebrity to deal with, can the Doctor get to the bottom of it all? After all, to quote Lucie, “This is much worse that Poirot!”

To recap briefly. In 1999, Big Finish Productions gained the rights to produce Doctor Who audio plays. Initially starring Peter Davison, Colin Baker and Sylvester McCoy, this provided the three actors, who to varying degrees had not been best served on the television. After a couple of years, Paul McGann, the Eighth Doctor, joined the team.

Max Warp is the second release in the second series of the stories featuring McGann as the Doctor and Sheridan Smith as Lucie Miller – and it’s rather wonderful. In case you hadn’t realised it, the Max Warp show is a spoof of the BBC’s Top Gear and Graeme Garden does a wonderful job of channelling Jeremy Clarkson – and if you don’t know who he is, then lucky you. Add in a gelatinous alien, a couple of murders and a fleet of angry alien spaceships, and you’ve a classic Doctor Who story. But is it a decent mystery?

Oh, yes, it puts The Robots Of Death to shame. There are clues all over the place, a not-completely-obvious killer and a twisty-turny plot with some very clever ideas. I’d hate to say much more, as it would spoil a lot of the fun. The cast is on top form and the script from Jonathan Morris, one of Big Finish’s most reliable writers, sparkles.

It’s available from Big Finish as a download for a £5 at the moment, making the most of Paul McGann’s recent reappearance as the Doctor in the prequel to The Day Of The Doctor. Highly Recommended.