The Mad Monk Of Gidleigh by Michael Jecks 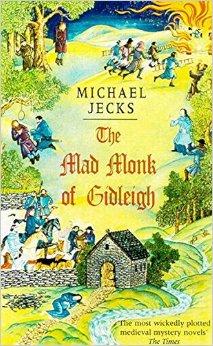 Winter 1323, Dartmoor. Mark has been isolated as the parish priest of the town of Gidleigh, his high hopes of a promotion into the Bishop’s staff or even just a reconciliation with his father fading with time. And then a spark of light comes into his life – Mary, the miller’s daughter. But friendship becomes something else, and when she tells him that she is pregnant, he is witnessed striking her and fleeing. His guilt is obvious, especially when he flees town…

Sir Baldwin Furnshill, Keeper Of The King’s Peace, and Simon Puttock, Bailiff of the Stanneries, are called to bring Mark back to Gidleigh to face justice. But Gidleigh is the one place that he can never get a fair trial. Sir Ralph, the Squire of Gidleigh, is determined to see Mark hang – but why is he so concerned for justice for Mary? Baldwin and Simon discover that the town conceals some dark and horrible secrets. Death is coming to Gidleigh – and he’s not leaving empty-handed.

OK, let’s get this out the way first of all. I love this series. This is the fourteenth book so far (out of thirty two) and I’ve loved every one of them. Complex stories full of character and history (set in my favourite period to read about – Paul Doherty may have lit the spark there, but Michael certainly fans the flames) – and each of them containing intriguing multi-layered mysteries. And, most impressively, there’s something a little different about each tale.

This one is darker than most – as a bit of a hint, the next book in the series is called The Templar’s Penance – and certainly that penance is well-earned. As the story progresses, and the truth about the deeply unhealthy relationships in Gidleigh is revealed layer by layer, I found myself utterly gripped by the book. It made the several hours that I was spending in Newark Airport between flights absolutely fly by.

And it contains a very impressive narrative trick. I won’t say what it is, not even a hint. But it’s one of those things that when you get to the end, you’ll be rolling your eyes, not quite believing that the author got away with it. But he did.

And also, given the darkness pervading the book, Michael is smart enough to still include a chink of light – some hoped for, by the reader, and one surprising redemption. By no means does it cancel out the preceding dark, but it makes a pleasant change from some thrillers (mostly modern ones) that just do the grim.

Oh, before I forget – one thing that bugs me a little about the series – would a peasant in Medieval England know what year it is? That’s not a complaint, but I’m generally curious. At what point in history would knowing which year it is be common knowledge. It’s not the first time that it’s occurred to me while reading this series… As I said, not an issue, just something that I’d like to know. Anyone got the answer?

Needless to say, Highly Recommended. Surely it’s time that you checked this series out. If you needed any other encouragement, here’s Michael himself talking about (without spoilers) this book.