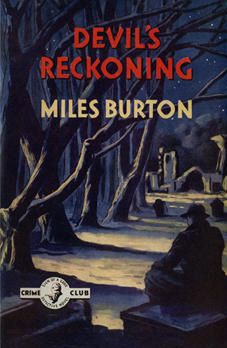 The small village of Dellmead is a peaceful place with a standard set of inhabitants. The vicar (who also happens to be lord of the manor), his son and his housekeeper; the publican and his wife; the doctor and his daughter; and so on. Despite the village having a reputation of devil-worship in the distant past, the days tend to pass quietly without incident. The only odd occurrence recently has been the removal of a carved figure of a past lady of the manor from the top of a tomb.

Until the carving seems to re-appear. Except that it’s not a statue, but a real dead body. In fact, it is the body of the lady of the manor – it seems that the vicar had a long-lost wife, who had come to the village. But (apparently) before she can meet the vicar, someone just happens to murder her. And the killer’s work is far from over…

Written in 1948, Devil’s Reckoning is the 35th book featuring Desmond Merrion and Inspector Arnold – an Inspector whose first step in every case is to assume that he won’t be able to find the murderer and call his friend Merrion. Needless to say, it take Merrion to spot the murderer with Arnold determined to fall into all of the traps and false assumptions that the killer intends.

It’s a decent outing for Merrion, this one, with a multiple killer on the loose. Not a common occurrence for a John Street/Miles Burton/John Rhode book – more often than not, in my experience, the case consists of a single crime – Death Sits On The Board is the obvious counter-example. This isn’t as strong as that outing, but it ticks along nicely with some nice ideas. Links between the characters are steadily revealed and it ticks along pleasantly enough.

But… while the motive takes a bit of guesswork, the killer is pretty obvious to anyone who’s read a mystery novel. It’s a bit of a missed opportunity in some ways, as it wouldn’t take much to hide the killer a little better, the devil-worship ideas could be played up a bit more, and a few more reasons that the other, unseen, residents of the village aren’t suspects in the mystery.

Some signs of the times:

Anyway, this book is available on the Internet Archive for free – see this post as to how to read it – and it’s a decent mid-level Burton. Worth A Look.

This is the first of my Twenty Books Of Summer 2017 – stay tuned for the rest.