Why Didn’t They Ask Evans? by Agatha Christie 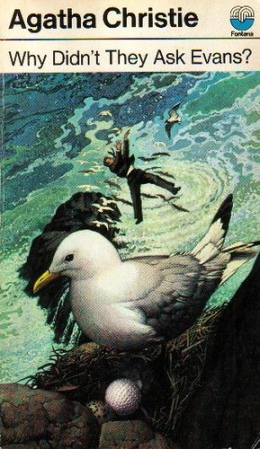 An innocent day’s golfing is going to have long-lasting repercussions for Bobby Jones, the son of the local vicar. After slicing a shot well off-target, he stumbles across a dying man at the bottom of a cliff. The man’s final words before passing away – Why Didn’t They Ask Evans?

Although the death is presumed by most to be an accident, Bobby and his old friend Frances Derwent are convinced that there is more going on than it seems. What do those last words mean? And who is the woman in the photo in the dead man’s wallet? Unfortunately, their investigations are soon noticed by the very people they are chasing – who is going to catch who first?

I’m easily persuadable sometimes. I was wondering what on my Kindle I was going to read on the train home from the Bodies From The Library and I remembered Dolores Gordon-Smith championing Why Didn’t They Ask Evans? as her Desert Island Book, basically for its sense of fun. Well, that sounded exactly like the sort of thing that I needed as I was feeling a little sleepy – nothing to do with the free glass(es) of wine at the Dagger In The Library presentation – and I was becoming convinced that I hadn’t actually read it before. I certainly couldn’t remember it, so I figured, what the heck? It’s been a while since Dame Agatha featured on the blog – almost a year in fact – so why not?

Why not indeed? Because I agree with everything Dolores said about the book. It’s a fast moving thriller – be warned, it’s not exactly a traditional Christie mystery, despite having a strong whodunit element. Capture, escape, attempted murder, and so on.

Bobby and Frances are entertaining leads, bouncing off each other nicely, with, as Dolores said, Christie clearly having a bundle of fun as the story goes along. The leads have the potential to be massively irritating, but Christie neatly sidesteps this, something that she doesn’t always achieve with Tommy and Tuppence, who could have easily been inserted in this story in lieu of the leads.

All in all, a lot of fun – a bit lightweight, but none the worse for that. Recommended, especially if you need a bit of fun. Thanks, Dolores.