She Shall Have Murder by Delano Ames 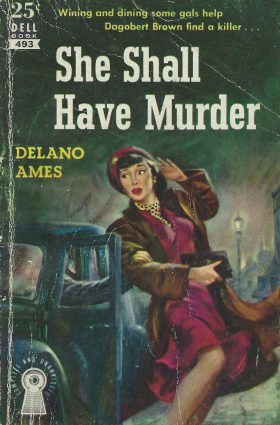 Dagobert Brown has a plan – and it involves murder. Basically, he intends to be a detective and solve one, but in the meantime, he is making do with persuading his girlfriend, Jane Hamish, to write a mystery set in her law firm. While they enjoy speculating who associated with the firm should be bumped off, Dagobert is more than a little shocked when the “wrong” person dies. But while everyone else is happy to write it off the death as an accidental gas leak, Dagobert soon becomes convinced the death was murder.

With everyone in the law firm a suspect, Jane becomes just as involved in the investigation as Dagobert, who is content to keep his activities under wraps from the suspects. But with little evidence for the killer’s identity and nobody else suspecting murder, can the killer be unmasked?

Kate over at Cross Examing Crime is to blame for this one. She’s been reviewing a number of Ames novels recently so when I was in the market for a new (but affordable) classic author, and I came across a job lot on eBay, I decided to give him a go.

Ames was an American writer, who then moved to England (and then later Spain). He wrote eighteen or so works of detective fiction – it’s a little unclear as various sources seem to differ. For example gadetection lists this as the second Dagobert mystery, whereas Goodreads makes it the first. It feels as if it could be the first, although Dagobert and Jane are dating at the start, so we don’t see how they meet. Gadetection’s alternative first title in the series, The Cornish Coast Conspiracy, has virtually zero web presence, so we’ll have to leave that question for another day.

After reading Quick Curtain, I was a little concerned about another humorous mystery – I didn’t get on with the sense of humour in that one – but thankfully that wasn’t the case here. Ames writes with a casual charm and an entertaining line in humour. The relationship between Jane and Dagobert sparkles and Jane makes a hugely enjoyable narrator.

The suspects are a fun bunch as well – Ames keeps the cast small but distinctive – and despite the whodunit element being a bit of a pin-the-tail-on-the-donkey game at the end, allied with a bit of a weak motive, this doesn’t undermine the fun that the reader (and the writer) had getting to that point.

I’m rather glad to say that I’ve got four more books from Ames lined up for the near future – he’s certainly an author that would benefit from the Dean St Press treatment. Highly Recommended.