The Case Of The Purloined Blog-Post by The Puzzle Doctor

The Puzzle Doctor was just a blogger whose witticisms and barbed reviews could create or destroy an author whether they be a newcomer to the world of mystery or a veteran of the field. [Hey, this is a blurb. Blurbs don’t have to be honest!] Writers quake in anticipation when their title appears in the Next Time On The Blog box. But he never expected what was going to happen next?

Why is another blog stealing his reviews? Why haven’t they asked his permission? And why have they garbled some of the writing? Is it a deliberate attempt to plagiarise without detection? What can possibly be done to thwart this theft? Luckily, the Puzzle Doctor is not alone – he has an army of followers to help him out…

OK, what’s the point of this post and why did I write that silly blurb? Well, basically, I want to see if the person nicking my material actually reads this and nicks this as well. Because I can be pretty childish when I want to be. I’m not going to tell you the website, as I don’t want it to get a single additional visit, but I am going to tell you about it, and warn my fellow bloggers to keep an eye out.

This has sort of happened once before, if you don’t count Michael Jecks reposting my reviews on his blog – cheers, Michael! Another blog, based in Russia, iirc, posted translated versions of my stuff, but it was done with full acknowledgement and links to the original source. So fair enough.

The new blog – well, it seems to be nicking my most recent posts, under the heading “Classic Mystery”, along with posts from three other non-mystery blogs, although for some reason, those posts were from April. It’s a WordPress.org site, which means WordPress.com can’t apparently do anything about it. So I’m trying to get a message to the blog creator to ask them to stop, but there’s a dearth of contact info. Apparently, there is a body that I can report them to, but that sounds like a hassle and awfully officious. I’ve emailed the other blog authors to let them know about it – I only discovered it when WordPress asked me to approve links to my posts, links that were in the original posts and remained in the article when it had been cut and pasted.

But here’s the odd thing – the change in some of the language. For example, my review of Murder On The Orient Express ended with the witty epithet:

I’m guessing that for whatever reason, the blog creator – I hesitate to use the word author – has run this into a translator and back again. There is some evidence for this, as one of the other bloggers’ posts appears in French. So without being re-translated, which is odd. It seems to be deliberate, not a bot, because of this error, but the person in question doesn’t seem to be reading the translations –  might the original author have auto-translate switched on in their browser and then posts a translation of that? So they don’t spot the errors due to not being a native English speaker…

So, what’s the point of this post, apart from trying to embarrass the thief into posting this? Well, a warning to fellow blogs. Put a copyright notice on your blog. Set up a Creative Commons license. And keep an eye out for people who nick your work. Yes, this is hardly the crime of the century but us bloggers work hard-ish to produce something to pass the odd 30 seconds of your time. Please give us the credit for what we do, and if you can’t do that, don’t appropriate our work in the first place without permission.

And if you are reading this on someone else’s site, come and meet the real me over at In Search Of The Classic Mystery Novel – the real deal, accept no substitutes! 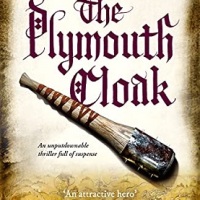