A Puzzle For Fools (1936) by Patrick Quentin

Peter Duluth, following the tragic death of his wife, threw himself into his work as a theatrical producer, but ended up at the bottom of a bottle instead. Determined to sort his life out, he checks himself into a private sanatorium – one which seems to cater for all sorts of mental afflictions, it seems. His treatments begin to show signs of progress… but then the voices start. Patients begin to hear their own voices proffering warnings of murder yet to come.

When murder does come – an orderly is found trussed up in a straightjacket – Peter is determined to find out what is going on. As a personal interest in the case develops, and a second murder takes place, he finds himself in a race against time to save an innocent victim from being framed as the murderer – well, if they are innocent, that is…

Patrick Quentin was the pseudonym of a number of writers – at this point, it was Richard Webb and Hugh Wheeler – who also wrote as Q Patrick and Jonathan Stagge. This is the first book to feature Peter Duluth – you may recall my previous glowing review of Puzzle For Wantons. Unfortunately reading that one did give away one mild aspect of the plot, but to be honest, if you fall for that misdirection, you deserve everything you get. But it is also the most unbelievable aspect of the plot, and, to an extent, feels a bit like Peter taking advantage of someone’s situation.

But putting that aside, this is an absolute cracker. The inmates of the sanatorium, along with the officials, are well-drawn characters and the plot goes all over the place with Duluth’s amateur investigations leading the reader to suspect anyone and everyone at some point. There’s some very dodgy behaviour going on, some of it apparently authorised, some of it not, used to attempt to cure the patients of their various ailments, which helpfully provides motives for anyone and everyone.

The plotting here is excellent, with some excellent twists and turns along the way, especially in the finale, with one particular aspect of the final scenes really impressing me with the general… common sense of it all.

You’ll be pleased to know that A Puzzle For Fools was recently reissued under the American Mystery Classics banner, so it’s readily available for anyone and everyone. This is an excellent read that has been unavailable for too long – it’s definitely worth your time.

Just The Facts, Ma’am: WHERE – In a hospital 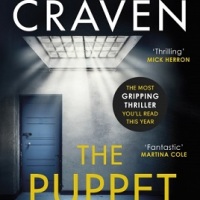