The Puzzly – The ISOTCMN Book Of The Month – January 2020

January 2020 is over and done with, so it’s time to celebrate books. There’s so much negativity at the moment that I’ve decided to embrace the positive – books are wonderful and people should read them! But should they read the same books that I read this month?

Eleven books reviewed this January, but I actually read two more. One is a Brian Flynn that I’m saving as I’m reviewing (and re-reviewing) books 11 to 20 in order and I had to jump ahead for that one. The other is an upcoming E & M A Radford, out in March from Dean Street Press, which I thought I’d save until nearer publication date. Those two are top notch classic mysteries, but what about the eleven that I reviewed. And, in the spirit of being positive, I’m only going to say nice things about them. Probably. Possibly. Well, maybe about most of them… 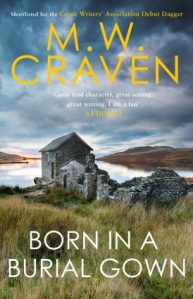 So, book of the month? Well, it’ll be one classic, one modern. For the modern title, it’s Born In A Burial Gown – looking forward to Body Breaker which is high on my TBR – and for the classic, yes, it’s that man again, Brian Flynn, with The Edge Of Terror just pipping The Padded Door. Just.

Oh, and if you want to find out even more about dear old Brian… can I direct you to this year’s Bodies From The Library conference? It seems that someone is giving a talk on him…