Murder By The Book by Eric Brown 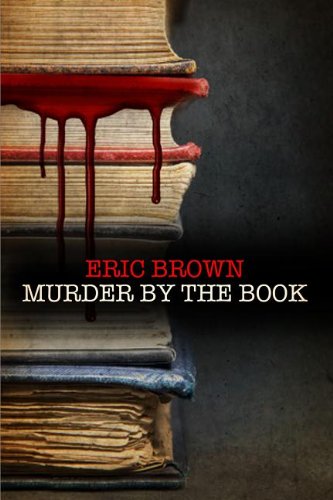 1955, London. Donald Langham, crime writer and reviewer and one-time private detective, is given a delicate request from his agent. He is being blackmailed with some career-ending photos of himself and a young lad from the local swimming pool. But the blackmail is only the start, because as he starts to investigate, he begins to hear stories about the deaths of some colleagues. They all seem to have died in the manner of their books.

With the help of his agent’s assistant, the lovely Maria Dupre, Langham begins to find links between the murders – but things seem to be pointing towards someone very close to home. As the deaths begin to mount, it seems that Donald and Maria are in a race against time to find the next victim before the killer can strike again…

Eric Brown is a writer of primarily science-fiction and this is (I think) his first foray into crime fiction. And it’s rather a good one.

The characters are the stand-out here. There’s an invetiable romance between Langham and Maria, both of whom really leap off the page and the interplay with the supporting characters are generally well drawn as well, neatly skirting the line of caricature in some cases (such as in the larger-than-life agent). There is one somewhat over-the-top individual, the would-be suitor of Maria whose actions seem a little extreme, but she does seem rather lovely, so I can understand someone getting that obsessed.

Plot-wise, well, the mystery is a bit of an old chestnut to be honest. But this is a charming read and that can be overlooked to be honest. The setting and the characters, along with a very readable writing style combine to make this a bit of a page-turner. Well worth a look.