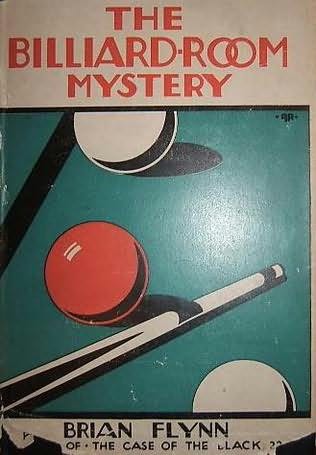 Considine Manor in Sussex, and Sir Charles Considine is holding his annual Cricket Week, held every year after “Varsity comes down” – which I presume means Oxford and or Cambridge’s terms ending. Our narrator, Bill Cunningham, relates how he and Anthony Bathurst became involved in a murder investigation – hey, it’s a country house party between the wars, what do you expect was going to happen?

Anyway, soon there’s a dead body in the billiard room (as you may have surmised from the title) and to add to the troubles, Lady Considine’s pearls have been pinched. Can Inspector Baddeley catch the criminal, or will it take super-sleuth and all-round amazing person Anthony Lotherington Bathurst to save the day?

I switched this one onto my Twenty Books Of Summer list, as Tragedy at Trinket was so full of cricket to be nigh incomprehensible, so I was utterly delighted when this one opened up banging on about the same topic. I’d picked this as a replacement due to a lucky Abebooks find – only a pittance for a US first edition from 1929 – but luckily it soon dives into the usual country house tropes.

Written in 1927 – we’ll come back to that later, as it’s important – this was Brian Flynn’s debut novel in the Anthony Bathurst series, which stretched to nearly 50 books before vanishing from bookshelves almost without trace. We get a detailed description of Bathurst – uncanny gifts for deduction, inference and intuition. These powers allied to a masterly memory for detail and to an unusual athleticism of body, separated him from the majority – one acknowledged instinctively his mental supremacy. He could probably crack walnuts with his buttocks too…

It trundles along hitting most of the usual notes for this sort of thing – a secondary crime that may or may not be related to the first, obvious suspects that are a bit too obvious to be seriously considered but it does give a few different least likely suspects to choose from for the actual culprit.

UPDATE: OK, I’ve decided to re-write this bit of the review. I’ve since re-read the book, and I’m sure claims will be made about one aspect of the story resembling something else in another Golden Age title. However, both books were developed independently, with the manuscript for The Billiard-Room Mystery doing the rounds of the publishers for over a year (and sitting half-finished in a drawer for six months) before publication. Any similarities are completely coincidental. It gets a mention (a completely spoiler-filled mention, mind you) in a footnote in John Dickson Carr’s essay The Grandest Game In The World.

This is definitely Well Worth A Look. Not perfect, a little overly verbose, but a fairly-clued mystery, a strong debut for Anthony Bathurst who will go on to even greater things than this, nine of which you can read, along with this one, when the title is re-issued in October 2019 by Dean Street Press.

For the full Brian Flynn bibliography, see here, and for the cover gallery, here.