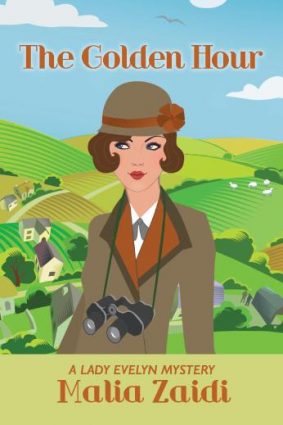 Lady Evelyn Carlisle is back in London, reconciled with her Aunt Agnes, and in love, only to discover a wedding invitation from her cousin Gemma that had been lost in the post. With Agnes in tow, Evelyn rushes to Scotland, expecting to find the family in a state of turmoil, only to find things she never expected, in particular the nearby Elderbrooke Park, an artistic retreat for war veterans.

When a murder occurs during the May Day celebration, and when Evelyn discovers a past mysterious death, it seems that a killer is on the prowl. But with the police preoccupied with a nearby criminal conspiracy, it falls to Evelyn to track them down.

The latest book in this series, which started with A Poisonous Journey. Evelyn’s life has stabilised, with a boyfriend and her friend returning to England, and she is developing the investigative skills of the amateur sleuth.

This is one of the better between-the-wars-emancipated-female-sleuth series, with a willingness to tackle the sort of issues that generally weren’t addressed in books of the time. Evelyn is an interesting character and fans of the genre really should give this series a try.

Part of the solution did seem pretty obvious to me, and I would have preferred some stronger clueing – Evelyn does seem to only realise who the killer is when they try to kill her – but the story is a strong one that keeps moving and maintains the reader’s interest.

This is another stop on the Blog Tour for the book – for other reviews, do check out the graphic below.